Do you think there is no life after addiction? That you're not capable of going on and creating a successful, fulfilling life? If you're stuck in that hole of believing that sobriety is boring or that no-one will want you to do important things because of how badly you screwed up before, then let this be a little story to inspire you.

I was someone who had more things wrong with me than were right with me. Since my teens, I had been an alcoholic, bulimic, self-harming, depressed, borderline personality-disordered, anxiety-disordered mess. I spent a long time dragging myself from one chaotic situation to another in despair and attempting suicide in between.

After a lot of suffering and a lot of hard work and help, I entered recovery from all those things, one by one.

I'm now 35 and was appointed as the Chair of a rather special charity this year. I have been with DiversityInCare as a regular member of the Board of Trustees for a while, but in 2015, I was asked to step up and take over as Chair. 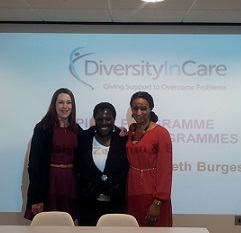 DiversityInCare works with people who wish to overcome a wide range of issues associated with drug and or alcohol addiction. Its CEO recognised that my past experience was an asset, not something to hold me back or distrust me for. The charity helps people who have been involved in criminal behaviour or domestic violence due to an addiction, and those who have shaky mental health. I had experience of all these situations.

A Chair is someone who ensures that an organisation is running smoothly and ethically and providing the service it was set up for. Who better than someone who has been on the other end of services to make sure that we are running the charity in a way that safeguards our clients' welfare and progress?

DiversityInCare is a national charity, but its activities are currently based in London. One of the things that attracted me to the charity was that it offered an individualised plan for service users, tailored to their needs. That is something that I find especially important, since everyone has their own journey to recovery, so it's a really exciting charity to work with.

So whether you're just beginning your recovery journey, contemplating what might be possible in sobriety, or are letting your self-esteem hamper your success, remember you are capable of whatever you set your mind to. In fact, if you're in recovery now, then you've already succeeded in winning one of the greatest battles there is. Don't be afraid of being able to build a fun and fulfilling future. You can, as long as you think you can.

Social care charities could always use some passionate, savvy volunteers, fundraisers and trustees who understand the world of addiction, so if you're up for a New Years challenge, why not join me as part of a team making a real difference to the world because of what we've been through, not in spite of it.