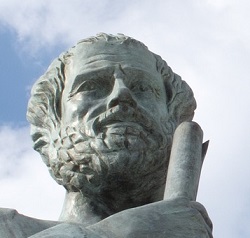 If you're going to start, start right. I don't know who said that, nor if anyone actually did, but it's great advice. And it leads me nicely onto another quotation, which you may recognise if you've read my book 'Instant Wisdom: 10 Easy Ways to Get Smart Fast'.

“Socrates was famous for a few things: sporting an astonishingly curly beard, rarely bothering with footwear, pondering, and stopping total strangers in the street to quiz them on their beliefs.”

This quotation was selected by Publishers Weekly for their monthly best 'first lines' feature, where they give a nod to creative indie authors' book beginnings.

It's an honour to have my line chosen by the top international book trade magazine, which has been running since 1872. Mind you, Socrates was around before paper was even invented.

I'd not heard of the 'First Lines' competition until recently, but I understand why it's a "thing". Every book has to capture your attention quickly in today's marketplace. Potential readers don't have much free time.

Thanks to Amazon's "Look Inside" feature, browsers can check out the first few pages to see whether or not they should bother investing time and money in a book.

I'm sure we can all recall a few of our favourite first lines. Mine include:

"All this happened, more or less."

"It was a bright, cold day in April, and the clocks were striking thirteen."

"First of all, it was October, a rare month for boys."

"The sun shone, having no alternative, on the nothing new."

If you'd like to read the other five first lines that were featured, along with mine, pick up a copy of Publishers Weekly dated 28 October 2019. You can get Instant Wisdom on Amazon or order it from all good bookstores.